As part of NEHC’s Time’s Up: What Now? series, Mark Rifkin will be at Amherst College’s CHI Salon Wellesley College’s Newhouse Center giving a talk on indigenous understandings of time and the speculative politics of solidarity.

This program, launched by the Embassy of France in the United States and the FACE Foundation, aims to encourage and support cooperation among the most promising young French and American researchers, and foster forward-looking collaborative research projects.

Each selected French-American project will receive up to $20,000 over a period of two years.

In support of the Make Our Planet Great Again Initiative launched by President Emmanuel Macron in June 2017, the Thomas Jefferson Fund is offering additional grants this year for research projects related to Earth System Science, Climate Change and Sustainability, and Energy Transition.

Interested parties are invited to get more information and to apply here: http://face-foundation.org/thomas-jefferson-fund/.

Laurie Essig is Professor of Gender, Sexuality, and Feminist Studies at Middlebury College. On February 14, she will be giving an NEHC-sponsored talk at Northeastern University. In anticipation of this event, Matt Guariglia asked Professor Essig a few questions.

First, I was wondering if you could tell us a little bit about your current project and what it is you’ll be lecturing about.

My latest book — out this week — is Love, Inc. Dating Apps, the Big White Wedding, and Chasing the Happily Neverafter (UC Press). Love, Inc. argues that in the US we have turned to romance with a vengeance in the past several decades. In part that is because romance gives us hope for a better future. All we have to do is meet “the one” (and have the most spectacular engagement, the perfect wedding, and the most romantic honeymoon) and then we too can live happily ever after. Even as most Americans became poorer and the world begins to come to terms with the effects of global climate change, romance promises that tomorrow can be safe and secure. I’ll be talking about why romance is so central to capitalism, particularly the sort of neoliberal capitalism that took hold in the 1980s and why we believe in the promise of romance even though we know deep down love is not all we need.

The name of the lecture series is “Times Up: What now?” do you have any thoughts about what direction you would like to see the current movement headed in?

I think Time’s Up for fantasizing about a privatized future, one where we are safe and secure in a castle on a hill with our Prince/ss Charming. The truth is we can no longer imagine our futures as individual projects as the polar vortex and monster storms bear down on us. We can no longer imagine ourselves finding financial well-being by getting saved by Prince Charming (or a Vampire named Edward Cullen or whatever the current fantasies are). Instead, we need to pay attention to structure, to history and to economy before it’s too late. Or maybe it already is and it’s just the romantic in me that imagines there might somehow be more time to get things right.

The talk you are giving focuses on the love industry and digital dating, in an era where we are all having this heightened conversation about gender and power, do you see these technologies and industries unbalancing some of the dynamics or reinforcing them?

I don’t think technologies per se are more or less misogynist or racist, but rather because racism and misogyny are so prevalent on social media platforms, it seems more “normalized” like it really is “#yesallmen” and “#yesallwhitepeople.” This certainly can start to see normal on dating platforms. Just look at Tinder and Grindr and being racist and sexist (and fat phobic and ageist and ablest, etc.) starts to seem depressingly widespread. And the platforms themselves have done little to regulate this kind of profile. But I am heartened by the fact that users (often women and/or people of color) are getting together to fight back with their own forms of public shaming like “Douchebags of Grindr” and “Bye Felipe” where the kind of men who create toxic cultures on dating apps are called out for it.

You’re giving this talk across a number of NEHC campuses, do you find particular value in getting this message to college students? Do you think the NEHC model of giving talks at multiple regional institutions allows you to think and address these issues in a new or intriguing way?

What’s been fun is talking to students about all this. For two decades I have been teaching a course on the Sociology of Heterosexuality and my students always complain that I have destroyed their childhoods and their fantasies for the future. But I always point out that all of them will go off and have a big white wedding and a diamond ring anyway because that’s the power of hegemonic ideology. But I like to think that they at least learn to resist and subvert some of the conventions of romance and maybe, just maybe, they are paying a lot more attention to how to healthcare for all or forgive student loan debt than what kind of flowers they’ll have on their big day. The other interesting thing is that I have been talking to students at Tufts and Dartmouth about my other work on queerness in Russia (something that I have been doing for nearly three decades now). It’s kind of the polar opposite of a wedding: widespread homophobia and violence. And yet, I think it’s really important to point out how in both the US and Russia, sexuality is central to our notions of citizenship and being a patriot and so in some ways the pressure to engage in the rituals and costs of romance is intertwined with violence and hatred of those who refuse to participate. 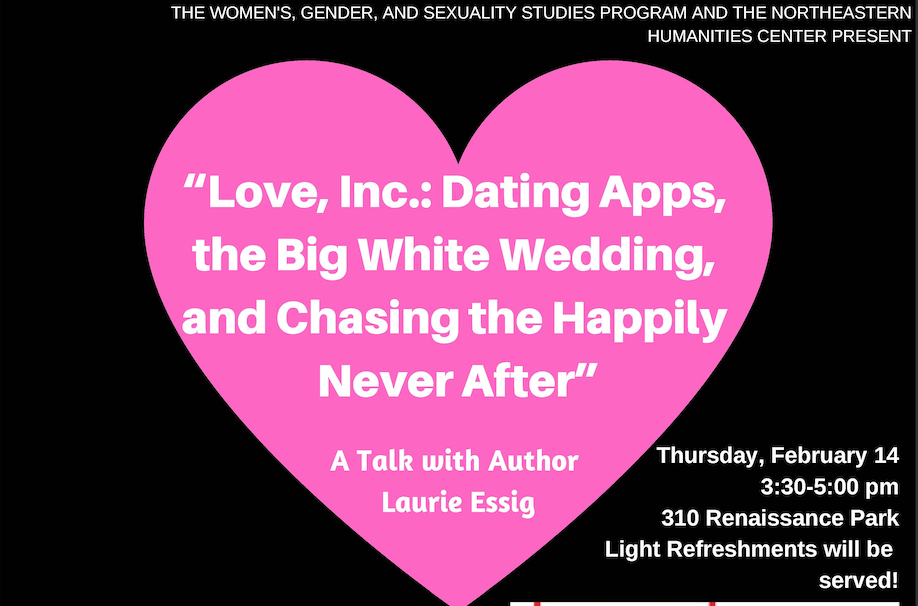 Celebrate V-Day the feminist way! Laurie Essig, author of Love, Inc., will give a talk at Northeastern University on February 14 on her new book, which encourages readers to think about romance as ideology.

Essig is Professor and Director of Women’s, Gender, and Feminist Studies at Middlebury College. The NEHC is providing support for this event!

Claudia Rankine, a MacArthur “Genius” and National Book Critics Circle Award winner, will read from her work at UConn’s main campus in Storrs and at the Greater Hartford Classical Magnet School on March 13, 2019.

She will appear at 12:30 p.m. on Wednesday March 13 at the at the Greater Hartford Classical Magnet School, 85 Woodland St, Hartford. She will offer a second reading at 7 p.m. that night at the Konover Auditorium of the Dodd Center,405 Babbidge Road on the UConn Storrs campus. Both readings are free and open to the public.

Rankine is the author of five collections of poetry including Don’t Let Me Be Lonely (Graywolf 2008) and the bestsellingCitizen: An American Lyric (Graywolf 2014), which uses poetry, essay, cultural criticism, and visual images to explore what it means to be an American citizen in a “post-racial” society. As the Judges Citation for the Jackson Prize notes, “The moral vision of Claudia Rankine’s poetry is astounding. In a body of work that pushes the boundaries of the contemporary lyric, Rankine has managed to make space for meditation and vigorous debate upon some of the most relevant and troubling social themes of the 20th and 21st centuries.” Among her numerous awards and honors, Rankine is the recipient of the Forward Prize for Best Collection, the NAACP Image Award, the PEN Open Book Award, and the LA Times Book Award for poetry as well as fellowships from the Lannan Foundation and the National Endowment of the Arts.

The Wallace Stevens Poetry Program began in 1964 with funding from The Hartford to honor modernist master poet Wallace Stevens, a former vice president of The Hartford. In the last half century, the program has brought a roster of the most important national and international poets to Connecticut. This year’s program is sponsored by The Hartford, with additional support from UConn’s African American Cultural Center and the College of Liberal Arts and Sciences’ English Department, Humanities Institute, and Creative Writing Program. For more information, please visit our website at http://wallacestevens.uconn.edu/